A Two day Workshop on ”Domestic Workers Regulation of Work and Social Security Bill, 2016″ by the National Platform for Comprehensive Legislation for Domestic Workers at Indian Law Institute, Delhi on 1-2 December. Among those who addressed the Workshop included Shri Bandaru Dattatreya, Union Minister for Labour and Employment, Government of India, Mr. Oscar Fernandes, former Minister for Labour. Members of Parliament from across the political spectrum addressed the workshop supporting the cause of domestic workers. Those present were Mr. Raja Bharatendra Singh and Mr. Dev Raj Govind Bhai from the BJP, Dr. Mumtaz from the TMC, Mr. Jitender Chaudhary and Mr. C.P. Narayanan from the CPI(M), Mr. Anwar Ali Ansari from the JD(U), and Mr. Ravi Prakash from the Samajwadi Party.
Earlier in the day, Mr. Omkar Sharma, Central Labour Commissioner, J.K.Sagar, Deputy Director General Labour Welfare, Mr. Naik, Deputy Commissioner, ESIC and other officials addressed the Workshop providing inputs to the drafting of the Bill. So also did members of Trade Unions, Adv. Colin Gonsalves and a host of others.
The fact that such support and good will has been evinced for tthe regulation of domestic work and to secure their social security is the result of the four year long work of organisation, lobbying and campaign of the National Platform since the first meeting was organised at Hyderabad in 2012 by Montfort Social Institute and Unorganised Workers Welfare Trust.
The Success of the Workshop is a boost to carry the campaign forward until an Act of the Parliament is in place to protect the rights of 35 million domestic workers in the country. 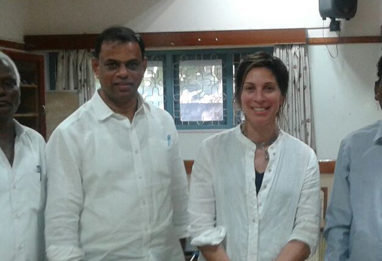