The Hyderabad City Slum People’s Federation (HCHPF) decided to pursue their demand for adequate housing and basic amenities through in situ development. Over 300 leaders representing the 1086 slum communities in Hyderabad demanded that adequate funds are allotted in the State Budget so that the 2 BHK housing of the Telangana Government is fully realized. It also demanded that unlike last financial year, the allotted funds for housing in the recently presented Budget are fully utilized to provide housing for the working classes. Civil society leaders representing legal, academic, and environmental and human rights organisations promised support to the Federation. The General Body Meeting adopted the following Statement and Demands at the Meeting. 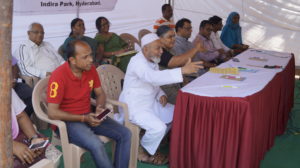 d in Parliament on 1 February promised to build one Crore houses for the weaker sections by 2019. Rs. 23,000 Crores have been allotted for this purpose. If one Crore houses are to be built in the next two years, 13,700 houses will have to be built every day of the next two years.  As per the reply given in the Parliament by the concerned Minister, only 2.3 Lakh houses have been built under the different Central Government schemes during 2014 to 2016, i.e., 315 houses constructed per day. If we go by this record, the government will take 43 years to construct the promised number of houses!

In the case of Hyderabad, 18.06 Lakh people live in the 4.21 Lakh houses in the 1086 slums. Over the years, 6608 houses were built under VAMBAY and 46487 houses under JNNURM.  A large number of these houses have no takers because either they are too far away from their work places, or because they are too small with practically no basic amenities, or educational and health care facilities. Whereas the 396 houses built under the 2BHK Scheme of the Telangana Government have been lapped up because they are built in situ thus protecting their livelihoods, and meets the UN principle of adequate housing. This is a Scheme if implemented properly can become not only a model for India, but worldwide.

But is the Telangana Government using the 2 BHK Scheme merely as bait to catch votes before elections? Considering the 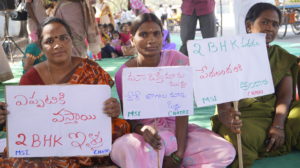 performance so far, it seems to be so. Out of the 2.6 Lakh houses to be built in the State, only 1500 have been either completed or in process. But half the term of the present government is already over! Will they be able to build the rest of the houses in the rest of the term remaining? Going by the current pace, it will take the government 173 years to complete project!

The Government plans to build the houses under the ‘Public-Private Partnership’ (PPP) model. This is a clever and planned  way to take away  the meagre land resources that are in the possession of the poor and the unorganised working classes. We have been told that the slums in Hyderabad are located on 12 per cent of the residential land in the City. This needs to be protected and increased to at least 20 per cent   if the principle of equity in proportion to the population is to be realized. Instead the PPP model threatens to make the 27 per cent of the City’s Working classes in slums victims of the avarice of the land sharks and realtors. This is a matter of very serious concern. 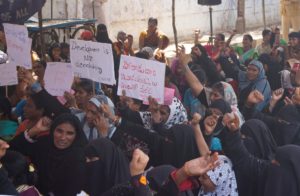 rnment of India has launched a series of urbanisation programs. The most significant of them all is the plan to make/build 100 ‘SMART’ cities. As the Prime Minister defined it, these will be cities that will be able to attract international capital. Hence much of the focus in discussions has been on developing world class infrastructure, digitalization and other peripherals. The real issues of the working classes that will truly make our cities SMART hardly find a mention in the deliberations – issues such as adequate and affordable housing for the unorganised workers who make and maintain our cities, basic amenities, quality education and health care… Isn’t it a shame that a Government that prides in the country’s technological developments allow human beings to go down to the sewages to clean the city’s dirt and die in these poisonous gas chambers? 32 people have met with such ghastly deaths in Hyderabad in the last few years!

Not only that the governments in the State and the Centre do not provide adequate land and housing for the unorganised sector workers, but often forcefully evict them from the houses they have built over a period of time with hard earned res 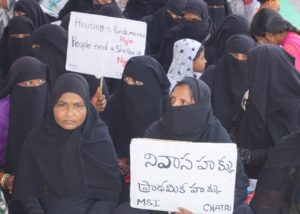 ources. Every time there are heavy rains resulting in flooding because of the mismanagement of the drainage systems in Hyderababd, the houses of the working classes in slums are targeted, even as the houses and establishments of the well to do encroachers are left un touched!

The Government of India is a Party to the Sustainable Development Goals (SDGs) adopted in Paris in 2015 with specific targets to be achieved by 2030. It specifically commits the Central, State and City Governments to leave no one behind in terms of adequate housing, basic amenities, quality education and health care, safe working conditions that protects dignity and safe- guard for all human rights. This was reiterated in th 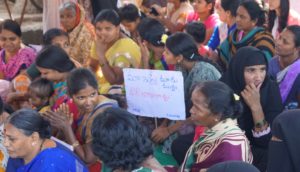 India that aspires to sit at the high tables of the International Community has to put her house in order urgently, by inclusion of all in development, protection of human rights and ensuring a minimum quality of life for all.  The 31 per cent of people who live in the slums of our cities to create their wealth need to be a priority. This is all the more so in the case of Hyderabad that aspires to become a world-class city. 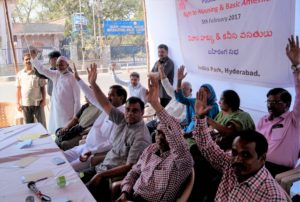