Mr. Narenderreddy, resource person for the meeting, gave the introduction of the Osmania University Campus Slums, the history and the present status. In his speech he told that, OU Camp Federation is disbanded for many reasons which costed the Housing Movement for the residents of the 9 slums.

Ms. Anitha, leader from OU camp 3, told that the situation at the university is dire and needs immediate attention of the Government to resolve the issue. She mentioned about lack of drinking water and Campus restricting passage ways for the slums become the biggest issues they are facing now. She remembered the incident where, one girl died of snake bite and another women died during pregnancy on the way to hospital. She recollected the promises made by the politicians during elections for the last 25 years.

Mr. Nurualla, OU 5 slum leader mentioned that, many of the leaders from the slums in Osmania Campus become associated with Political Parties and serving the parties instead of the people. He told that many leaders are only interested in taking the people to the public meetings and distribute money at the time of elections and collect money from the slum residents in the name of applications. He told that the CHATRI people, might not be successful in achieving housing for them so far, however their efforts are selfless.

After all the leaders spoke, following resolutions were taken

2. To file a case before State Human Rights Commission

3. To meet State Governor who is Chancellor of the University and submit a memorandum. 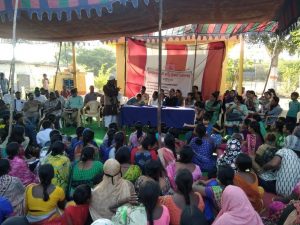