Housing Rights Campaign of the urban poor is facilitated in partnership with Campaign for Housing and Tenurial Rights (CHATRI) in five cities. The objective is to create a network of the urban poor around the right to housing, to claim the city and its resources as equal citizens. 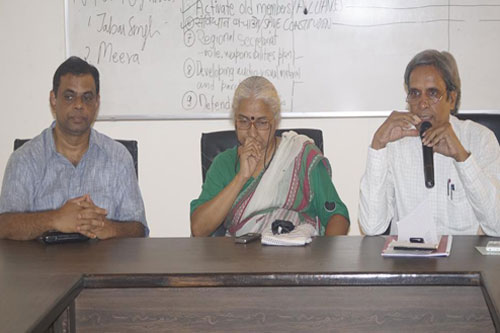 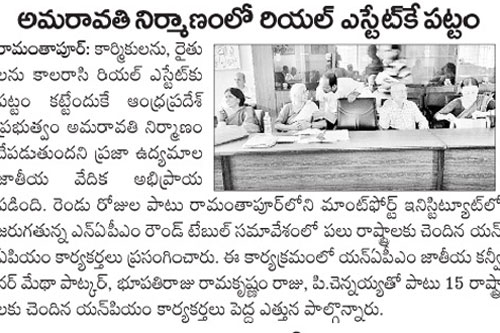 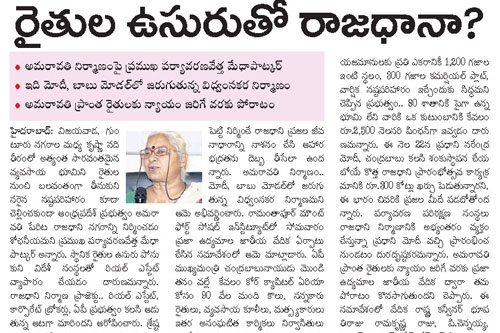 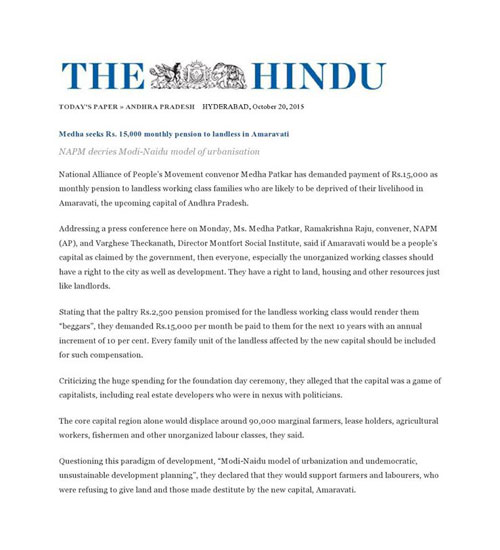 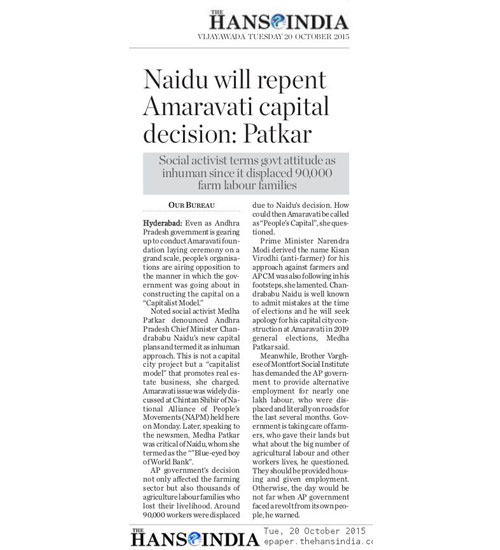 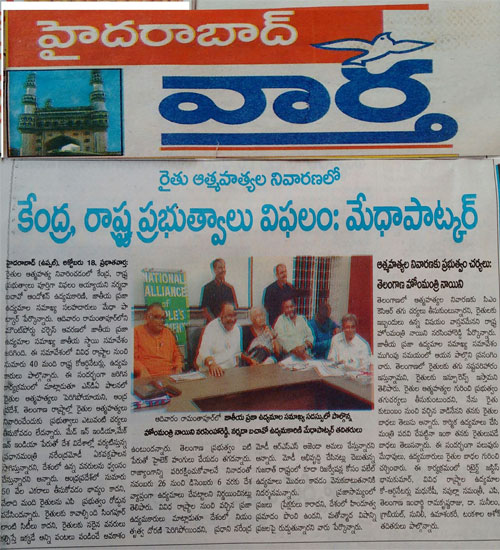 At the end of the NAPM Conference, Madha Patkar, Varghese Theckanath and Ramakrishna Raju addressed the Press. 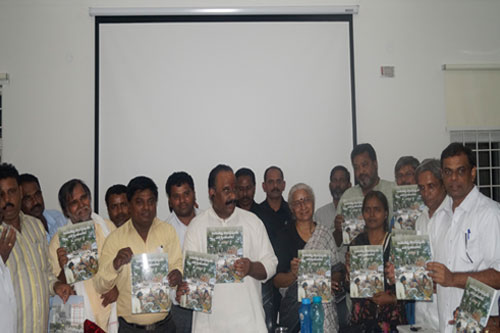 Mr. N. Narasimha Reddy, Home Minister, Telengana State released the MSI publication on Forced evictions in the presence of Medha Patkar, Ramakrishna Raju, Varghese Theckanath s.g. and others. The Minister promised to stop all evictions of the urban poor in the State and provide them two bedroom housing on a priority basis.

A two day Consultation was held at Delhi on 14-15 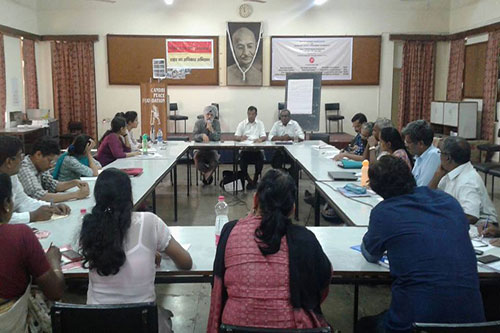 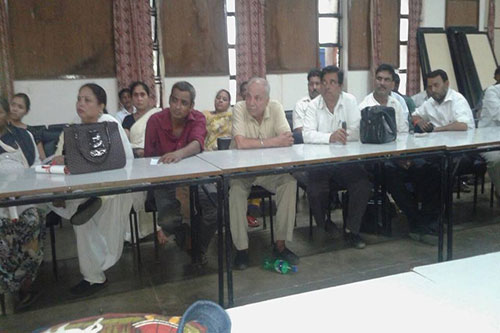 June on HABITAT III to understand the content and processes of the once in 20 years UN event on the urban reality. Participated by about 40 civil society activists working on urban issues, the meeting analysed the theme and sub-themes of the 2016 event and its pre-events. It was highlighted that the mandatory Country Report of India is still in preparation. How communities of the the urban poor themselves and civil society groups can contribute to it was discussed. Dr. Kulwant Singh, UN Advisor on HABITAT III in India, talking at the meeting hilighted the need and methods of civil society participation in the Conference. The participants decided form themselves in to a HABITAT III Civil Society Forum. Two sub- groups were also formed, one to prepare an Alternate Report, and the other to facilitate in the Conference process. Montfort Social Institute will form part of the Sub-group on participation, while contributing to the Report. 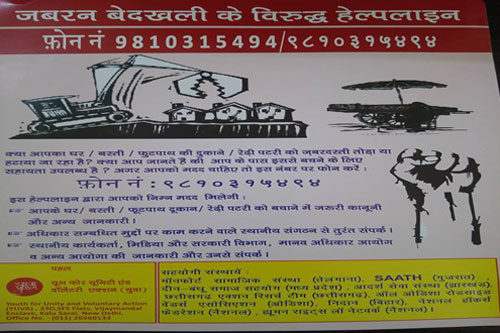 A national Helpline to support the urban poor faced with evictions was launched yesterday at Gandhi Peace Foundation Auditorium. Piloted by YUVA, Montfort Social Institute, CHATRI and other civil society organizations drawn from seven States, the Helpline will was launched by Swamy Agnivesh, the former UN Rapporteur Against Modern Forms of Slavery, and Mr. Harsh Mander, the Supreme Court appointed Commissioner on Food Security. The Helpline will provide legal, advocacy and other support systems to urban communities faced with eviction. In case of eviction, Call 9810315494 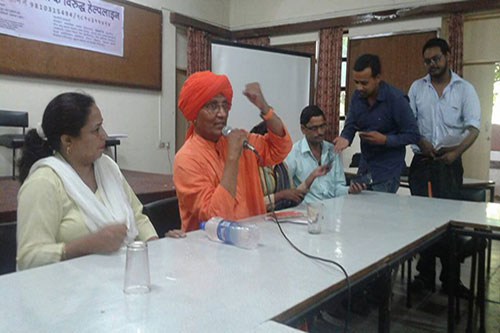 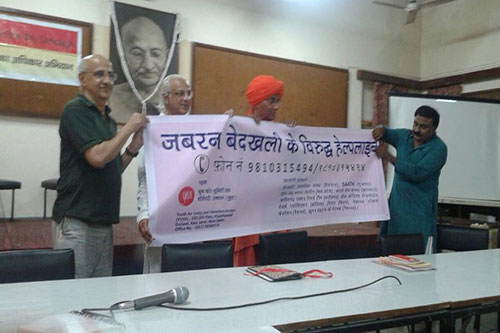 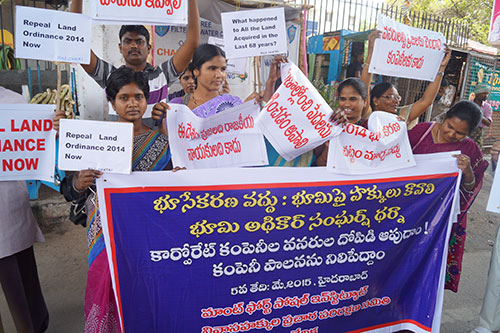 No landacquisition, we demand land rights: Take back Land Ordinance now!!
A dharna has been organised today at Nalagonda X Roads, Malakpet, by Montfort Social Institute (MSI), Campaign for Housing ans Tenurial Rights (CHATRI) and Human Rights Forum (HRF) expressing solidarity to 15 peoples’ organisations, Kisan Sanghatanas that are taking out a massive rally in Parliament Street in Delhi against the amendments to the Land Acquisition Act – 2013. The Central Government is giving undue favour to Corporate COmpanies by harming the poor and the peasants. In the name of development and attracting investment the Modi government is going all out to support the privatisation and corporatisation, which is against the basic tenets of Indian Constitution.

Speakers in the dharna demanded that the Government should not bring in any amendments to the existing Act.They opined that the lands given to corporate companies under SEZ are lying unused and demanded that thay be returned to the people. they expressed in strong words that the resources belong to people of this country and the Government is only the custodian. Bro. Varghese Theckanath of MSI, S. Jeevan Kumar of Human Rights FOrum, Md. Aswaq, CHATRI, Syed Bilal, HRF and representatives of COVA, AMANVEDIKA and many other social organisations spoke in the dharna and expressed solidarity to the cause. .

MSI Round Table Call for Just, Inclusive and Sustainable Cities 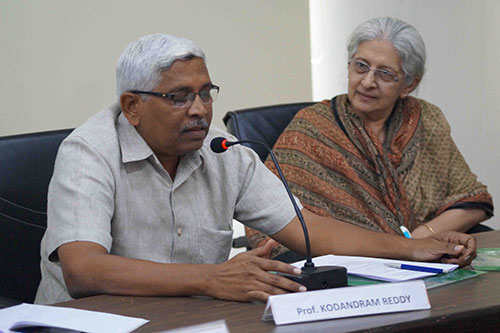 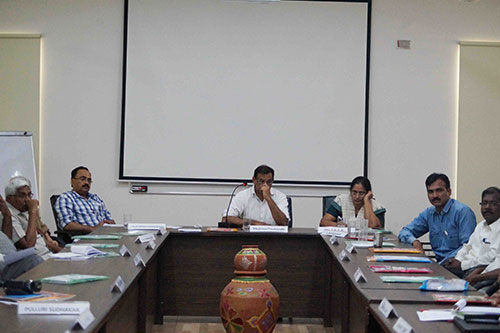 Hyderabad: The Telangana JAC chairman, Prof. Kodandaram, emphasized the need to plan development of cities from the view point of the majority people, particularly the poor and the middle classes. Prof. Kodandaram who spearheaded the Joint Action Committee for the state of Telengana was speaking at a Round Table of activists, academicians, environmentalists and representatives of non-government organizations from the States of Telangana and Andhra Pradesh on “Inclusive, Just and Sustainable cities” at the Montfort Social Institute (MSI) Hyderabad, on Wednesday, 18 March. The MSI director Brother Varghese Theckanath chaired the proceedings. 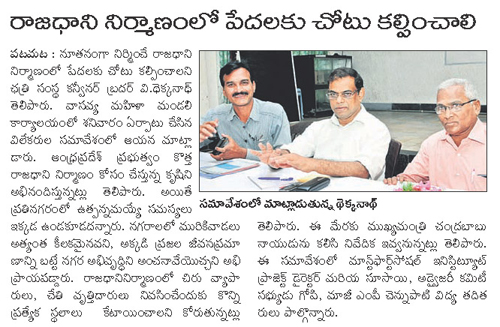 On 31st January MSI-HRN team headed by Varghese Theckanath held a Press Meet to highlight the emerging scenario of the establishment of a new capital and the need to protect the rights of the urban poor for an adequate dwelling. He wanted that 25% of the residential area in the new capital be reserved for the unorganized working force in the city.

City Coordinators of MSI-HRN of Hyderabad, Vishakapatanam, Vijayawada, Warangal and Kurnool met together with the MSI Office Staff to evaluate the performance of the Housing rights project. Each of the city coordinators made PPT of their work in their city. The same was discussed upon by the other members and solutions and suggestions made to take the Housing Rights Movement forward.

The Director, Varghese Thackanath , talked of launching ‘The Right to the City ‘ campaign. MSI –HRN was also asked to look at “Smart City” concept from the perspective of the poor and redefine it and prepare an action plan to include also the workers in the “Smart City” plan. 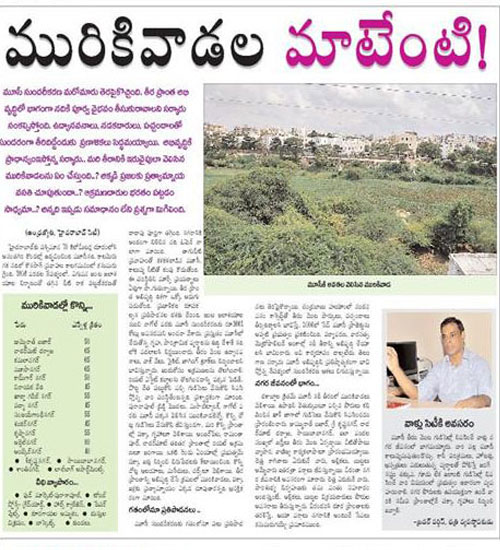 Where do the people of the 13 slums who have been living there for between thirty to sixty five years fall in this venture of the Government? They must be part of the beautification process and must be considered participants in the process of beautification of Musi River, demands Montfort Social Institute, Hyderabad

DATE: 11 January, 2015
The slum Committees of Pilligudusulu, Lambadithanda and Angadibazar,along with the MSI Activists met on Sunday, 11 January at MSI premises. 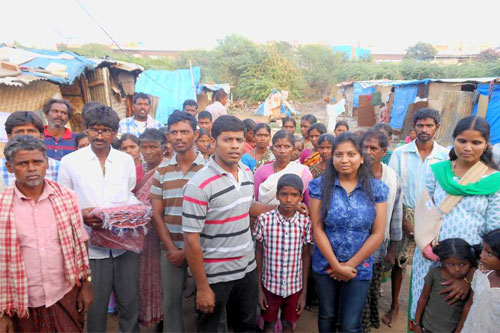 52 families lost their dwellings in a fire accident that occurred in Somi Reddy Colony in Rajendra Nagar, Hyderabad. The people, mostly construction workers lost all their belongings and savings in the disaster. MSI – Housing Rights Network (HRN) made a survey of the affected people and provided immediate relief to mitigate the impact of the winter cold. A memorandum was submitted to the Government for adequate compensation for the losses. It was also demanded that the people of Somi Reddy Colony are provided adequate and affordable housing. 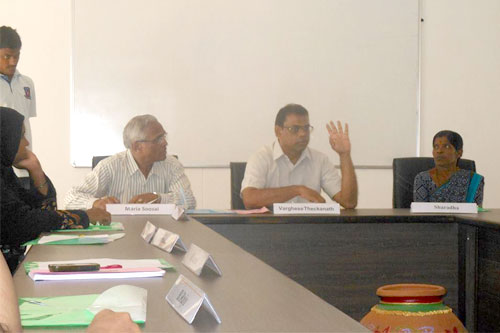 The newly elected members for the Federation, representing 40 slums in Hyderabad to fight together on a common platform for the housing rights of slum dwellers met at the MSI Conference hall for the 1st Federation Council Meeting(FCM) on 23/11/2014 @ 11 am.

The Federation decided to follow up with the following:
1. To enroll all eligible candidates in the reformulated Pension scheme (Aasara) of the Government of Telangana.
2. To prepare Detailed Project Reports(DPR) for Pilligudisalu and Lambadi Tanda slums in Hyderabad to obtain housing.
3. To create awareness among Members of Legislative Assembly (MLA) on the newly formulated Slum Dwellers Property Rights Bill, so that they can proactively contribute to protect the rights of slum communities in Telangana. 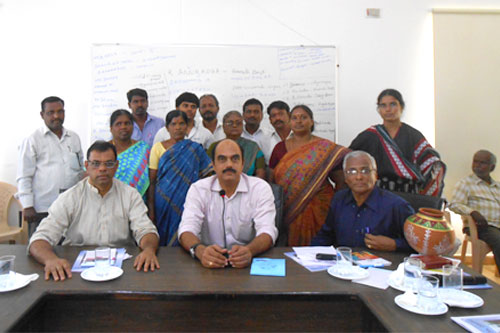 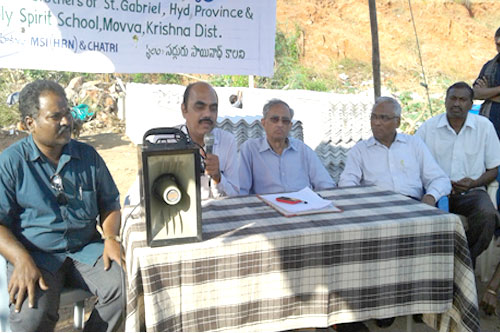 All the 204 families of Surya Teja nagar in Vishakapatnam celebrated Diwali, the festival of lights with the sola lanterns, when no power supply is yet resumed after the destruction by HUD HUD. 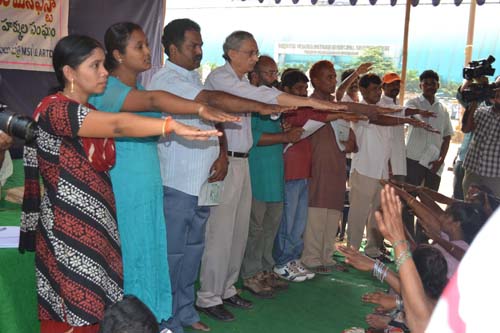 The urban poor in Vishakhapatanam took a historical pledge to use the power of NOTA against candidates in the Parliament and Assembly elections in the State in May this year if they did not accept to abide by the charter of demands formulated by them after wide range of consultations. The Pledge was led by well known social activist, Mr. E.A.S Sharma (IAS rtd.), Mr. Vasu Pragada (MSI Housing Rights Coordinator, Vizag) and others 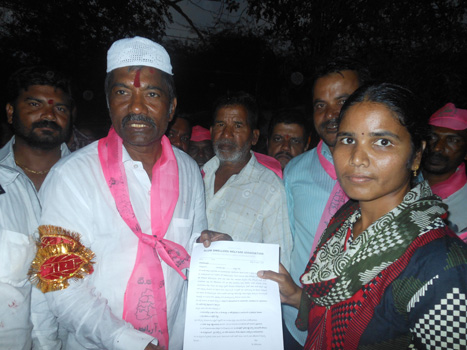 Residents of the nine slums located in Osmania University Campus presented a memorandum to the candidates for the State Assembly elections demanding that they are provided security of tenure and civic facilities. The Candidates promised to work to fulfill the demands if they are elected.

Issues of the Urban Poor Discussed 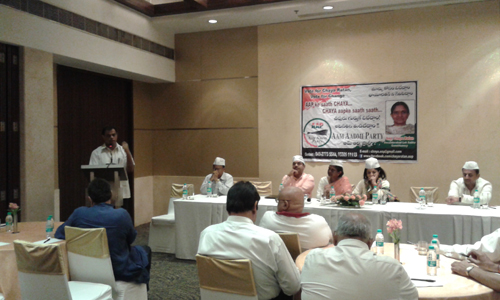 MSI team interacted with candidates from different political parties to discuss major issues of the urban poor to be included in their program of action if elected. Among them were Ms. Chaya Rattan (IAS Rtd) and Shazia Ilmi from Aam Aadmi Party, Ms. Jayasudha of the Congress, Mr. NVS Prabhakar of the BJP and Mr. Prasada Rao of the TRS.